Interview on BBC Radio 3 In Tune for the premiere of Pay the Piper with Glyndebourne Youth Opera. Also featuring 'How Do I Love Thee' from the song cycle From the River

Interview on BBC Radio 3 for Adopt A Composer

Interview on Before the Bar Opens podcast with Emma Clarke

Feature in US TV Documentary Turning Point with Streetwise Opera

...the score flows seamlessly while allowing the musical personalities to shine. ★★★★

Pay the Piper with Glyndebourne Youth Opera - The Stage (Feb 2022)

The music is played by Psappha and although at time is complex and modern there is an underlying sense of a folk tradition. And the music is wonderful as is the libretto which is accessible and at all times sung with clarity, negating the need for the surtitles.

What soon came to mind was that this new work has real potential to be seen and heard again and again... ★★★★★

The Piper’s story, together with the framing passages, the interludes and the opening and closing music, was composed by Anna Appleby.  Bold yet hintingly plaintive motifs introduce The Piper...

Anna Appleby‘s 5-minute solo saxophone piece 13.8 Billion Years began as a soaring melody, before exploding into florid life peppered with key-clicks (which, for once, didn’t seem like an overused effect) and sharp multiphonic colourations. Amy Green’s performance of the piece was fantastic: beautifully controlled through the opening, and genuinely mesmerising as the work developed, coming across like a snake charmer. Though both the title and the premise of the piece were (deliberately?) preposterous, it didn’t matter; I interpreted it that the previous 13.8 billion years had all been leading up to this particular moment – a wait that felt totally worth it.

Another of the gems in this collection has to be ‘Funreality’ by Anna Appleby...

Anna Appleby’s 13.8 Billion Years was performed by saxophonist Amy Green. Inspired by ‘the formation of the universe, through clouds of matter to galaxies, to stars, planets and, eventually, life,’ Appleby explores the universe of soprano saxophone technique in an accessible work with a rhythmically inventive central section that shows her affinity with dance. Green’s outstanding breath control and perfectly placed multiphonics revealed this piece to be an excellent addition to the repertoire of adventurous saxophonists.

Riot Ensemble Zeitgeist Commissions - I Care If You Listen (Nov 2020)

The song cycle... was commissioned by @glyndebourne and shows Anna's dramatic flair even with the small forces involved.

Anna's work also reaches far outside the realms of the concert hall, as in this dreamy electronic work for dance, 'Sunken City'.

Anna's 'Sleepwalking' began as a piece for @EnsembleKlang and can offer a short and manageable introduction to contemporary music for young and old players alike, or an opportunity for more advanced performers to find the expressivity in simple musical materials.

But the ones I found most powerful were Lucy Hale’s Kisses, Crosses, Losses, a slow, keening lament that continued the story of the 1914-18 tragedy, Anna Appleby’s Disabled, an unaccompanied setting of Wilfred Owen that formed a pivotal point in the evening, and Grace Evangeline Mason’s Lifted, an interlude of simple innocence that did what the title said, with eloquent melody, as a child describes the joy of solitude and the open freedom of the park.

Sounds of the geese and of water were prominent on the tape and to begin with, the three instrumentalists painted little dabs of musical colour over the sounds of the birds. Gradually the trio coalesced playing together in attractive and very poetic sounding music. Towards the end there was a resurgence of the geese and the water. The whole piece was very colourful in its evocation of the northern landscapes or should I say seascapes?

Dzierzon’s Cue, to music by St Hilda’s graduate Anna Appleby, is an exceptionally strong collaboration between composer and choreographer that began in the earliest stages of musical composition, resulting in a particularly satisfying close-knit work.

...the themes of loss, conflict and identity crisis which it highlights are complex and chillingly familiar in the current political climate. The intimacy of the RADA Studios gave composer and librettist Anna Appleby a fantastic space in which to explore these issues with some fresh and gripping writing.

There was Anna Appleby, late of the Young Sinfonia orchestra, with her staccato and fragmented musical phrasings based upon Le Nozze di Figaro.

Opening of Glyndebourne Festival (May 2022) 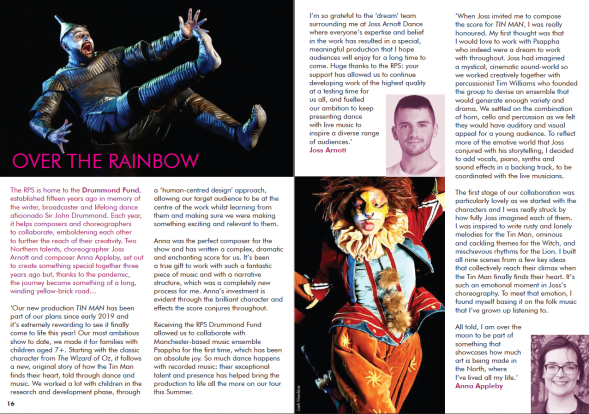