A miniature for symphony orchestra commissioned for Sounds New and premiered by the CBSO conducted by Clark Rundell in January 2023.

This piece is inspired by the latent grief of the volta in Elizabeth Barrett Browning's 'Sonnet 43: How Do I Love Thee' which declares 'and if God choose, I shall but love thee better after death'. I previously set this poem as a song in my cycle 'From the River' for mezzo-soprano and piano, and focused on the overwhelming joy of the text as love is poured out through every line. This time, the 'setting' is effectively a song without words, and the absurdity and horror of grief are the focus, as the piano alternates between fighting with the orchestra and sinking into reluctant unison. The juxtaposition of light and dark is inspired by Shakespeare's Sonnet of the same number: 'All days are nights to see till I see thee, And nights bright days when dreams do show thee me.'
This composition was commissioned by the City of Birmingham Symphony Orchestra as part of its Centenary celebrations, with support from the John Feeney Charitable Trust.

Commissioned for and premiered on the Glyndebourne Tour 2018 in 'Behind the Curtain', presented by Chris Addison, Last Breaths reimagines Aida's death in the context of her cultural identity. It is an orchestral miniature suitable for a mixture of abilities.

Composed for a workshop with the Royal Scottish National Orchestra as part of the Composers' Hub 2017/18, Hypomania is a ten-minute piece for symphony orchestra that explores mood swings and listlessness.

Composed collaboratively with Glasgow-based community orchestra Merchant Sinfonia, Turbines was the result of Anna's 2017/18 'Adopt A Composer' residency run by Making Music and Sound and Music in association with BBC Radio 3 and with support from the PRS Foundation. The premiere took place at Glasgow City Halls on 17th June 2018 and was broadcast on BBC Radio 3 in January 2019. Turbines is inspired by the wind turbines surrounding Glasgow, especially those along the train route to Manchester, and is an ode to Scotland's commitment to renewable energy. 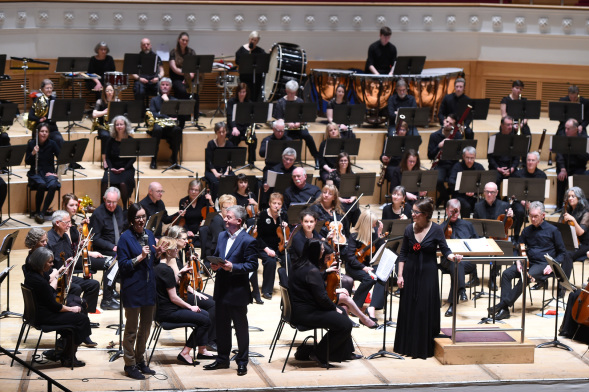 Originally composed for a workshop with Manchester Camerata, Federalizing Zoo received its world premiere at 2nd Prize at the 'Mozarts of Tomorrow' concert with the Royal Northern Sinfonia in January 2016. It was later performed and recorded by RNCM Wind Ensemble. Federalizing Zoo is the disastrous aftermath  - and an anagram - of Le Nozze di Figaro and incorporates themes from the opera's Overture as well as 'Voi che'.