Anna was co-commissioned by Riot Ensemble and HCMF with Zeitgeist Online Gallery to write a solo saxophone piece for Amy Green, with whom she collaborated via Zoom during the pandemic. The piece is 5 minutes long, a length of time which is a bit shorter than the age of the universe...

Anna was commissioned by Glyndebourne to write a short song cycle, setting words by Elizabeth Barrett Browning, for the Jerwood Young Artists' Recital Series. It was premiered by Stephanie Wake-Edwards and Matthew Fletcher in the Organ Room at Glyndebourne on the 11th and 14th August 2019 and was recorded by Myles Eastwood of Eastwood Records www.eastwoodrecords.co.uk/

Anna collaborated with harpist Eira Lynn Jones to create a solo piece for concert harp or clarsach. Eira Lynn Jones gave the concert harp premiere of Knocking on the 13th January 2019 at RNCM Strings Festival and the clarsach premiere at Edinburgh International Harp Festival on the 7th April 2019. Eira subsequently took the piece on tour to Johannesburg and Cape Town, South Africa. Find out more here.

As part of Psappha's Composing For scheme, Anna collaborated with clarinettist Dov Goldberg to create a solo for Eastern European Folk Instrument, in this case the Clarinet in G.

Originally composed for solo piano, these miniatures were premiered as part of CUE by Ensemble Klang in 2018 and performed again at sound festival Aberdeen later that year. Find out more here.

Composed for either solo voice and piano or soprano and chamber ensemble, The Windhover is a setting of Gerald Manley Hopkins' poem of the same name and was premiered by The Hermes Experiment at the PRS New Music Biennial in 2017. Find out more about the Hermes Experiment here. 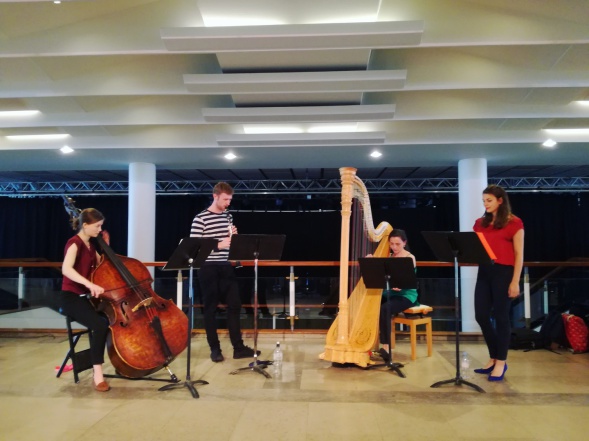 This string quartet has four movements, the first of which was premiered by the Cavaleri Quartet at the Holywell Music Room in 2014. The original title for movement one was 'Eschaton', meaning 'the end of all things', and was a 'Requiem' for Gaia, goddess of the Earth.

Anna was co-commissioned by Nordic Viola and sound festival Aberdeen to create this Iceland-inspired piece for viola trio and electronics. It features sounds of migrating geese (specifically the species that migrate between Scotland and Iceland) and the title describes the feeling of being buffeted by a storm against one's will.

In 2015 Anna won the Rosamond Prize at RNCM for her collaboration with MMU poet Merrie Williams. You can hear their winning piece, Four Sunflowers, below. Anna has also written two song cycles and numerous individual songs for voice and piano, many of which were collaborations with living poets. To Margot Heinemann was commissioned for the RNCM Day of Song 2015 and 'Martyrs' Bay' is an excerpt from the 2014 song cycle Fridge Poetry.

This piano miniature was commissioned and premiered by Grace Francis for the album SACRED which was broadcast on BBC Radio 3 in 2015.