Commissioned and premiered by North East choir Voices of Hope, you can now purchase the CD 'A New Christmas' including Behold! here.

This piece was composed as part of a set, Timbral Verses, which was workshopped by the BBC Singers in 2014. 'If I Have Not Love' was premiered in September 2018 by the choir of St David's Episcopal Church, Baltimore, conducted by Douglas Buchanan. It has since been performed in Toledo, Ohio by The Glass City Singers conducted by Brad Pierson. 'If I Have Not Love' is a setting of 1 Corinthians 13.

This piece was composed for The Sunday Boys, a Manchester LGBT+ male voice choir conducted by Michael Betteridge, following the premiere of 1967 in the Red House.

This piece was composed for The Sunday Boys, a Manchester LGBT+ male voice choir conducted by Michael Betteridge, and is a setting of poet Rachel Mann's text which was written especially for this commission. The piece explores the relationship between Benjamin Britten and Peter Pears at the time of the partial de-criminalisation of homosexuality, the 50th anniversary of which was commemorated by the concert: '50 Years of Change'. 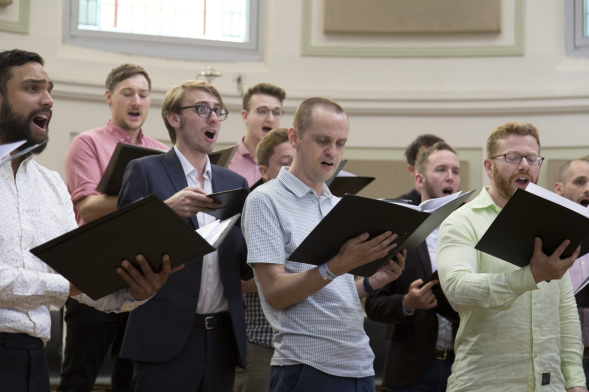 This piece was composed during Anna Appleby's residency with the Sage Gateshead's Young Musicians Programme in 2016/17. She was Artist in Residence with Quay Voices. Anna led lyric-writing and composition workshops with the youth choir and set their words to music in this two-part piece which explores remembrance, standing up and speaking out.